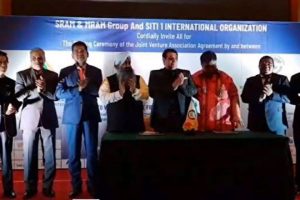 With the participation of our country, the world’s largest international tourism organization Halal was established.

The largest international Halal tourism organization for the first time in the Southeast Asia and the world, with the merger of the two companies SITI1 and SRAM MRAM India with a joint venture, the International Voice and Information Agency of Kuala Lumpur said. One billion dollars was founded.
“Mohammad Sharif Malekzadeh, chairman of the board of directors of SITI1 , said on the sidelines of the signing of the agreement of the world’s largest tourism halal organization: By creating the Halal International Tourism Organization in the next three months, the largest virtual AI system for e-commerce, Halal products and services in 22 areas of food, beverage, cosmetics, sanitation and pharmaceuticals in hotels, restaurants, coffee shops Hospitals, chain stores, livestock and poultry slaughterhouses will be available to tourists from all over the world through aviation, maritime, rail and road transportation, With the sign of the siti1 Bath Suite with tourists in our country

Special Report of the Reporter of the IRIB News Agency

Pointing out the very good organization of SRAM MRAM, the chairman of the board, SITI1, added that Um India as the largest e-commerce AI has added: With the participation of this large collection in the context of this artificial intelligence, we will now be the only trustee of the world’s tourism holistic portfolio.

“The real estate” said: The creation of this global organization, with the participation of India and Iran, has astonished the Malaysian Halal food industry, as it only operates in the food industry, but our newly established organization operates in 22 vast and completely exclusive areas.
He announced the worldwide registration of Halal Tourism in the European Union, the African Union, the Middle East and Commonwealth countries and all countries of the world at the World Intellectual Property Organization (WIPO), adding: This is the biggest event in the economic sphere of our country.
The CEO of siti1 said: With the launch of this large collection, more than 100,000 jobs will be created directly and many young people in Iran and other countries will enter the widest market.